“Most of the houses are of the most miserable description, far surpassing in that respect what I have seen anywhere else – they have neither windows nor chimneys, and when you enter them, you are in almost complete darkness, with an atmosphere around you that you would not leave a pig in”

This description of a ‘cabin’ in West Cork gives an insight into the appalling living conditions of the poor in Famine-era Ireland.

The 1841 census divided the houses of Ireland into 4 categories:

The 1841 census shows that 40% of all rural families in Ireland were living in one-roomed cabins, including those living in the Skibbereen Poor Law Union. Entire families lived together in these tiny houses, sometimes sharing their living accommodation with a pig.

These single-roomed cabins – sometimes without windows or chimneys – were built cheaply from whatever materials were available in the locality.

“Their clay or stone walls gathered from the earth on the spot, their timbers dug from the bogs, their thatch harvested from the fields.” 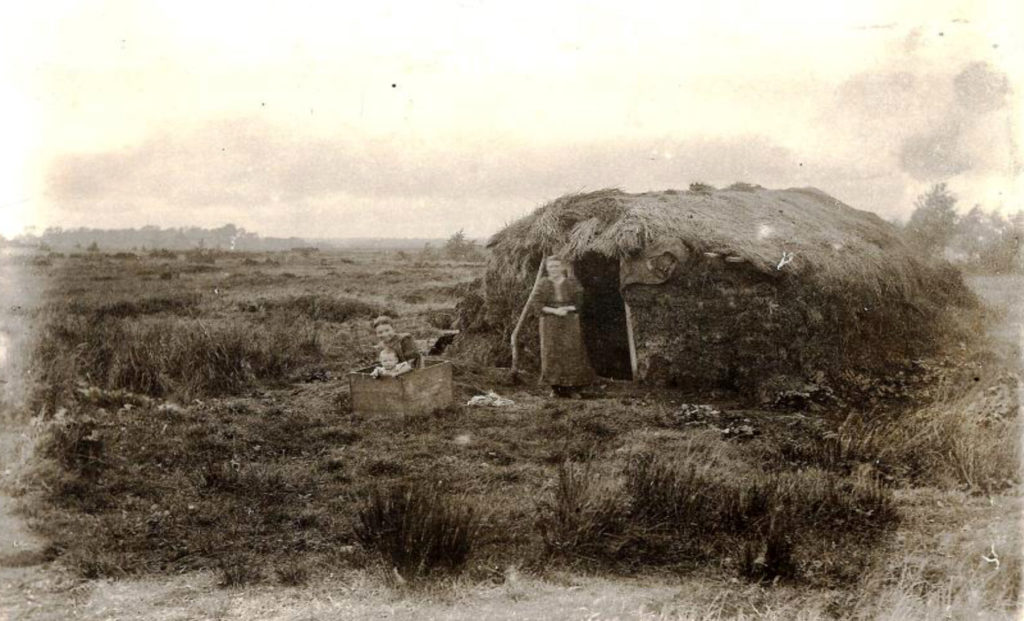 Quite often, before building would start, the site would be marked out by placing flat stones at the corners, each with a smaller stone on top, to be left there overnight. If the stones were still in place the following day, construction could begin. This unusual tradition had its roots in fairy folklore. The house builders had to ensure that they were not building across a path of the ‘good people’ or slua shí. This advance warning to the fairies was, in effect, a sort of planning application.

The least expensive, and the most common form of construction, was the sod-wall cabin. This consisted simply of large grassy lumps cut from the earth. A foundation of loose stones was laid, and the trimmed sods were piled up to form the wall. The resultant walls were weak and very apt to subside, even when supported by timber uprights. Sometimes the sods were mortared together with clay. Window and door openings were created simply by hacking out a suitable space once the building was complete. The roof was generally supported by corner posts. A sod-wall house could be erected in a day. 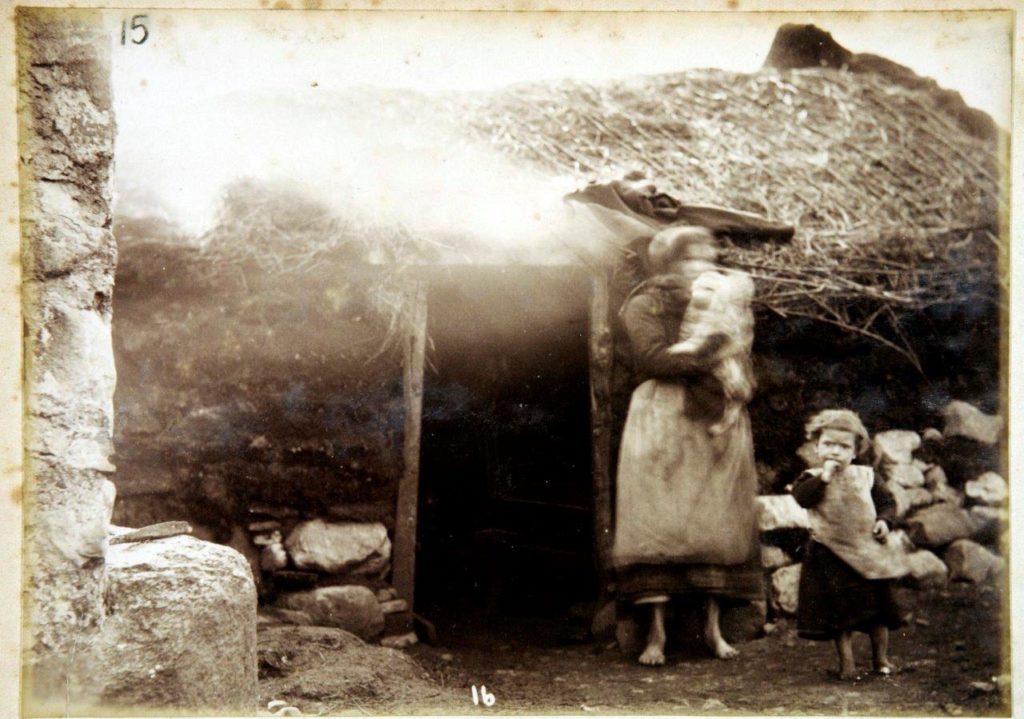 These cabin-dwellers were the poorest of the poor and the people worst affected by the Great Famine and so many of these houses, like their occupants, were lost during the Famine. By 1901, this type of housing was practically extinct with just over 0.5% of the overall population listed as living in this type of housing in the census that year.

The organic nature of these structures mean that they left little trace on our landscape. Though housing a large proportion of our poor, none of these cabins remain today. 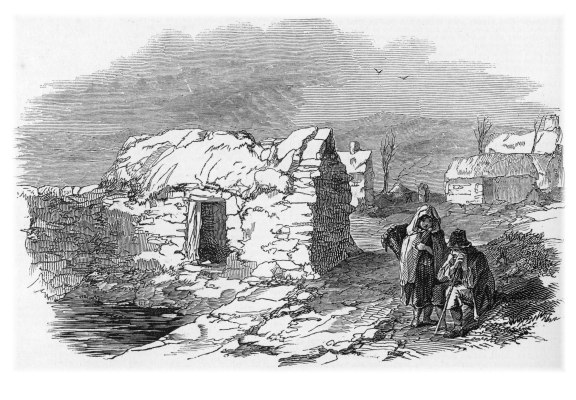 (Cabins in the village of Meenies, near Drimoleagues, sketched in 1847. Nothing remains of this village today)

However, a fantastic project, headed up by Skibbereen native Ross O’Donovan, rebuilt a replica of a 4th class house on the grounds of University College Cork.

As part of this process, so much was learned about these structures and how they were constructed. 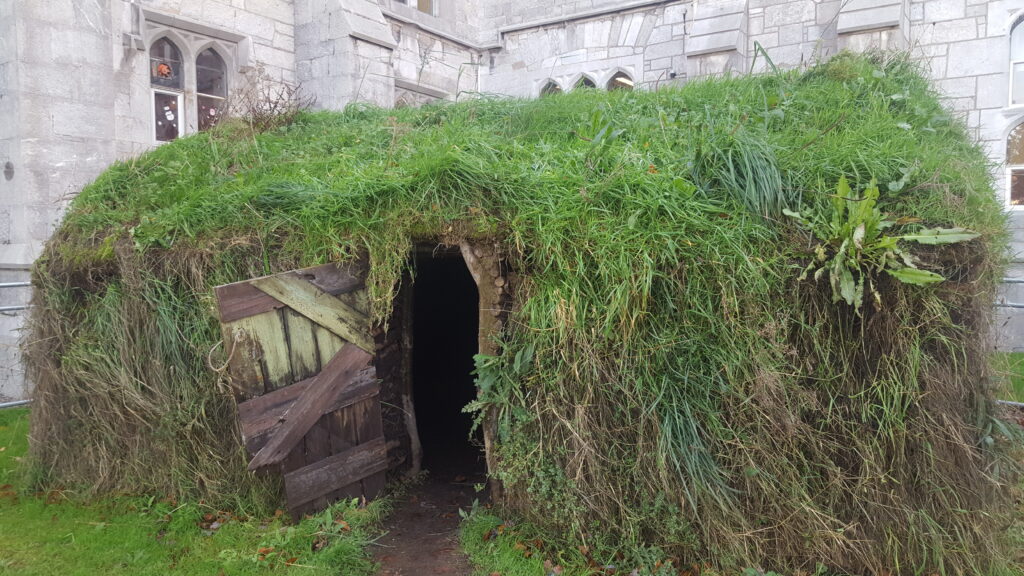 (The cabin juxtaposed with the older buildings of UCC, which were visited by Queen Victoria during the Great Famine in 1849.) 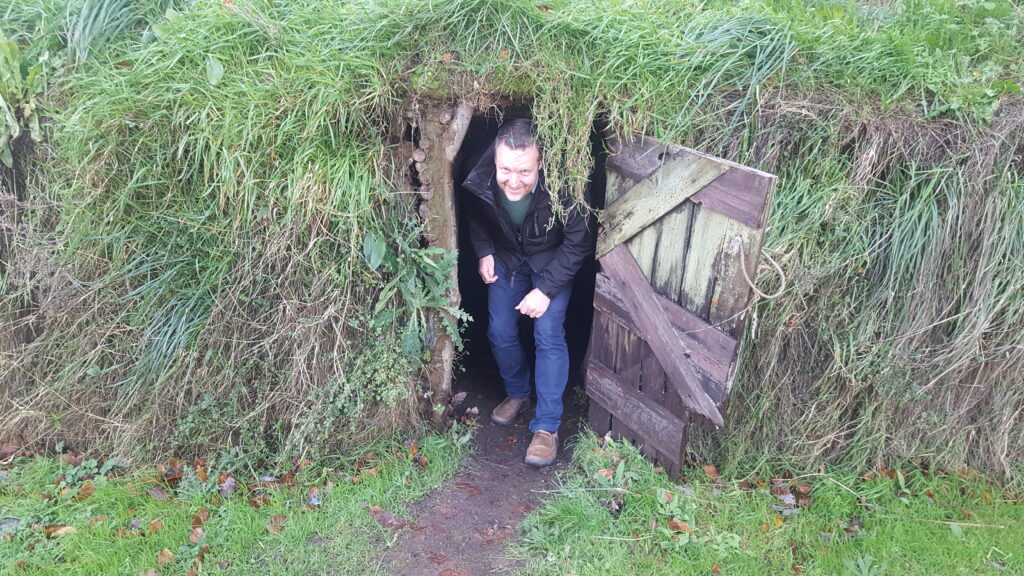 The reconstructed cabin also serves as a tribute to our ancestors, the forgotten poor who suffered so much during the Great Famine in Ireland. Congratulations and well done to Ross and all involved in this very worthwhile project at UCC. 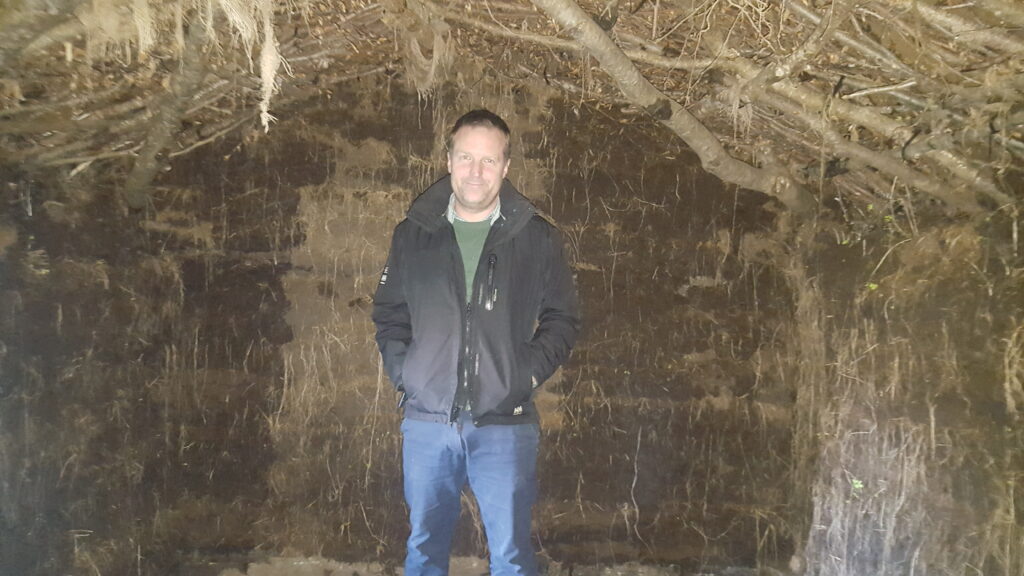 (Skibbereen native, Ross O’Donovan of Carrigfadda, inside the cabin)

A Century as a Local Historian