(Watch a video tour of this graveyard)

The old Caheragh Graveyard is adjacent to the River Ilen and an ancient monastic site – ‘Blessed Mary de Caheragh’ – which was once situated on the hilltop overlooking the graveyard. 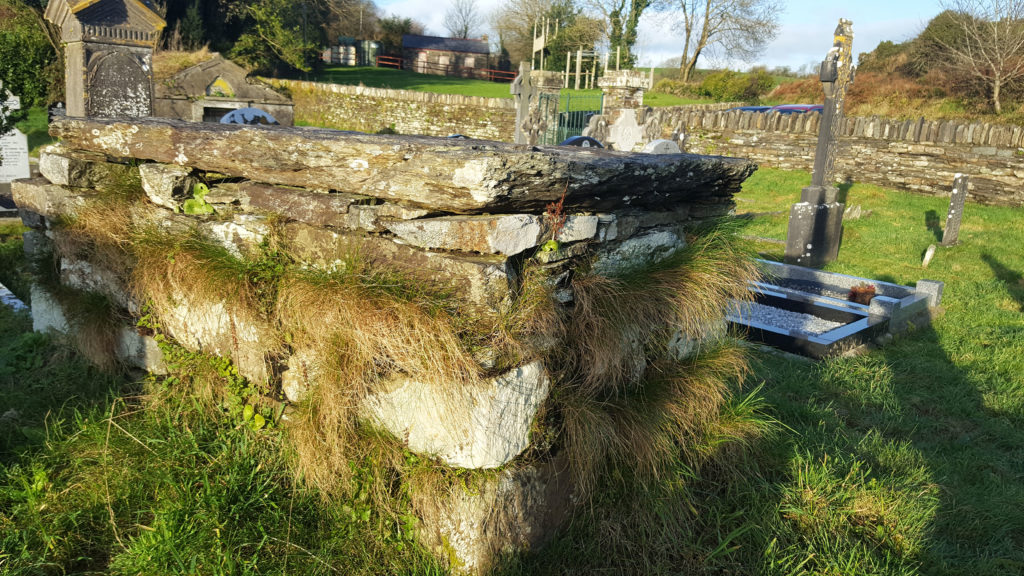 There are a variety of monument types within this graveyard, from elaborate mausoleums and vaults to simple locally-crafted grave markers and uninscribed stone markers. 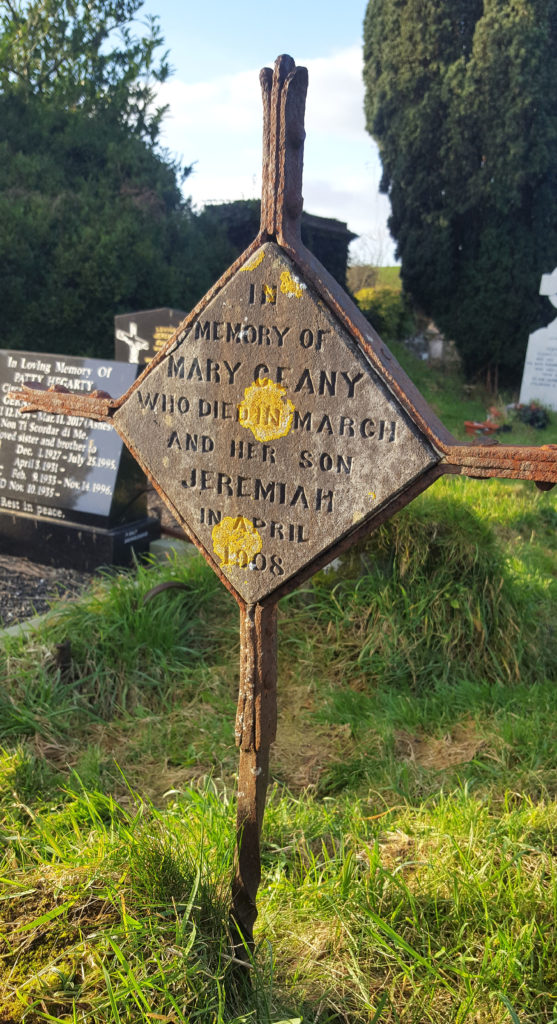 The earliest surviving inscription dates from the 1700s. The graveyard is still used for occasional burials in existing family plots.

Just inside the main gate is the mausoleum of Henry Newman of Betsboro. He was, by far, the most substantial landlord in the Caheragh area. He died in 1879 and his coffin was kept in St Mary’s Church for a week while his mausoleum was being built. 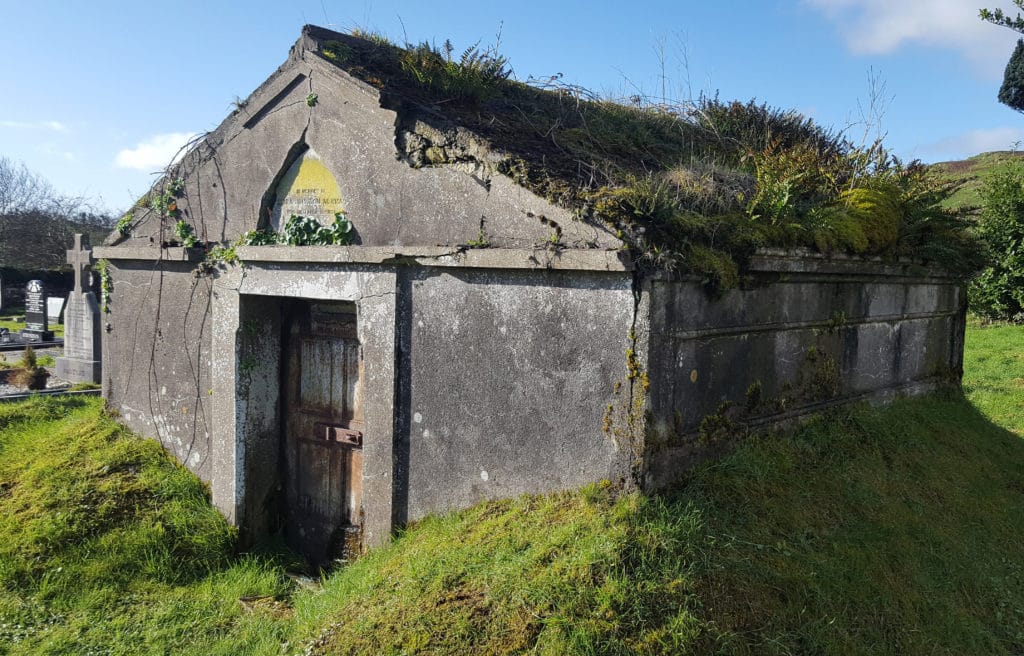 Mary Theresa Collins lived in the village of Caheragh and died in 1919 at age 16. She contracted rheumatic fever when she was 9 years old and suffered from ill health thereafter. She was said to be particularly devout in her final year of life, visiting the church daily despite her deteriorating health. 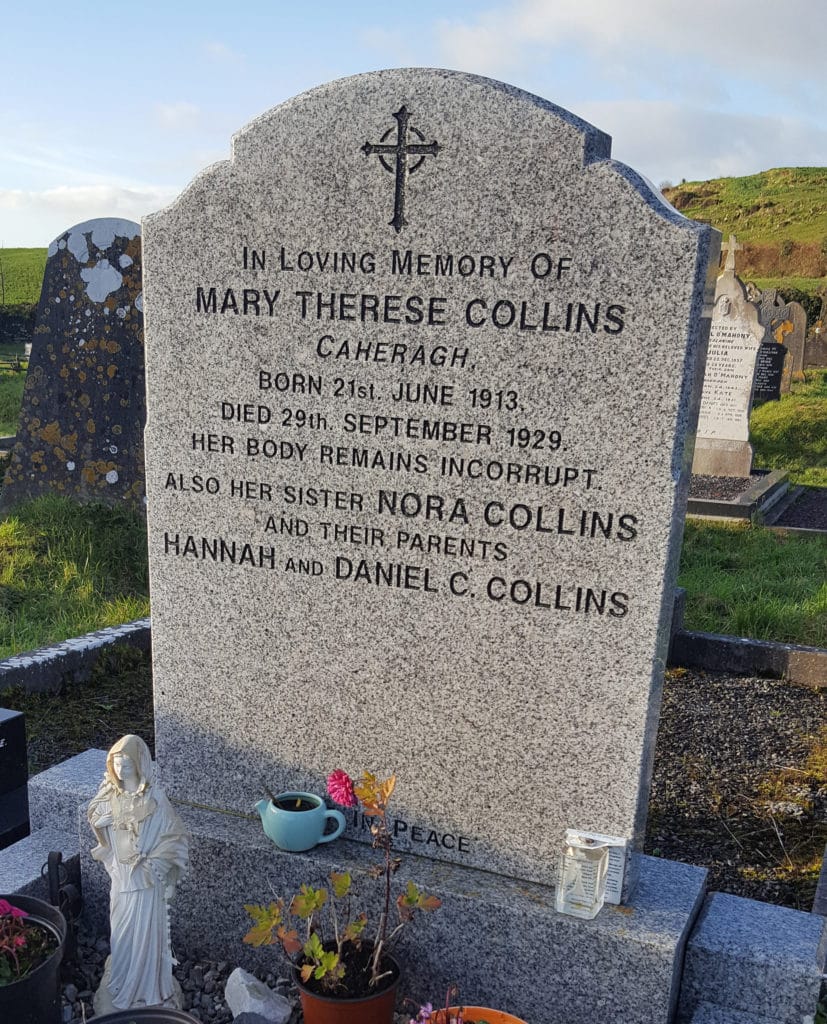 Fifty years after her death the Collins grave was dug for another relative and the gravediggers found Mary Theresa’s body to be ‘perfectly preserved’ when they opened her coffin. A new headstone was erected declaring her body to be incorrupt and her grave became a site of pilgrimage thereafter, particularly after 1981 when the story featured in the Cork Examiner newspaper.

John and Catherine O’Neill of Tralibane are also interred in Caheragh Old Graveyard, their headstone erected by their son, the famous collector of Irish music ‘Captain Daniel Francis O’Neill of Chicago USA’.

Daniel Francis was born in Caheragh in 1848 and left home at the age of 16, travelling and working in various locations before joining the police force in Chicago. He was appointed as Chief of Police there in 1901 and served in that office until 1905 when he retired from the force after 32 years in the police force.

He came from a musical family and began to collect Irish music and dance tunes while in the US and, with the help of others, recorded many thousands of melodies over the decades. His ‘Music of Ireland’ publication in 1903 featured 1,850 Irish tunes and went on to be reissued under various titles over the years and is still highly regarded by traditional musicians. He subsequently published many other volumes of Irish music and dance tunes that he recorded for posterity. Captain O’Neill is buried in Chicago but he is commemorated in the townland of Trawlebane in Caheragh by a life-sized bronze memorial of him, depicted playing a flute.

Timothy McCarthy-Downing came to Skibbereen to work as a solicitor  just before the Great Famine. A native of Kenmare, county Kerry, McCarthy Downing was very active during the Famine as both a member of the Skibbereen Committee of Gratuitous Relief and the Board of Guardians of the Workhouse.

In the years after the Great Famine he purchased over 3000 acres of land, much of it in Caheragh parish. He died in 1879 and bequeathed his home, Prospect House in North Street, to the Bishop of Ross when it became the Bishop’s Palace.

With the support of Cork County Council, Skibbereen Heritage Centre has created a sign for Caheragh Old Graveyard which lists all those known to be interred there, as well as a brief history of the site.