The Kinemac – the first cinema in Skibbereen

We’ve alluded to it many times, just how beautiful it is to look out over the River Ilen from Skibbereen Heritage Centre in the historic old Gasworks building in Upper Bridge Street.

On any given day, the variety of wildlife is quite amazing – the changing seasons bring colour and variety all of their own.

And, as we look over the Ilen River, to the field on the opposite side, we are often reminded that it was the site of the first cinema in Skibbereen.

The Kinemac opened to the public in December 1914. It was built by Gerald J. Macaura, a native of Skibbereen, who though he emigrated as a young man, never forgot his native town.

The Kinemac was very much before its time and, unfortunately, it did not last for very long in Skibbereen – it closed within a few years.

Macaura built the Kinemac to fund the West Cork National Volunteer Corps which he had helped to establish and to support the old brass band which he revived. In 1914 he provided the band with a complete set of silver-plated ‘Prototype’ Besson instruments and engaged the services of a well-known London professional bandmaster, Mr. J.G. Chipchase, to train them. 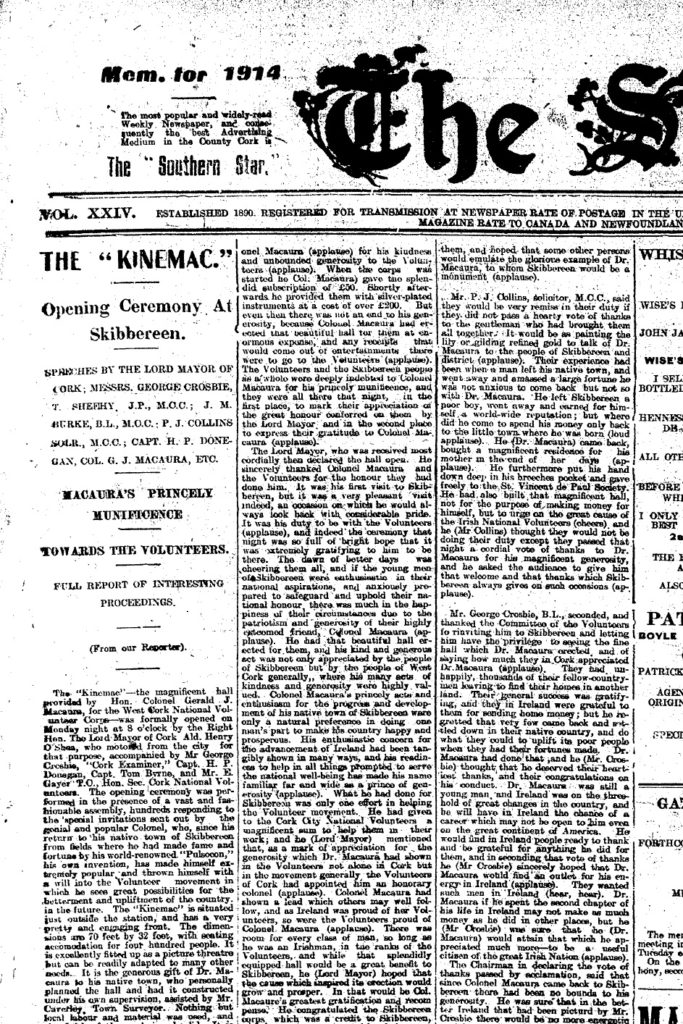 The front page of The Southern Star of Saturday 19 December 1914.

The Kinemac was an extraordinary undertaking – personally planned and constructed under Macaura’s own supervision, it was 70 feet by 32 feet with seating accommodation for four hundred people. The cinema machine itself was a Gaumont de Lux, the best in its day, and he also supplied an accompanying Cauraphone, which reproduced perfectly the human voice. A beautiful piano was also part of the equipment. 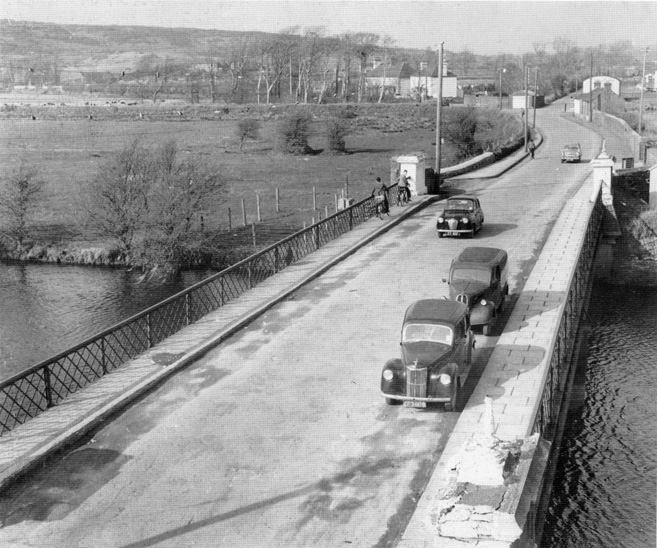 The old metal bridge at Ilen Street, Skibbereen. The Kinemac was in the field on the left of the photo. One of the young lads on the bicycles seems to be looking directly at the site.

Unfortunately, the Kinemac didn’t get the support it deserved and of course opening just at the beginning of World War I wasn’t ideal, as those were very lean years indeed.

Gerald Joseph Macaura was born in Skibbereen on 1 May 1871, his father was Florence McCarthy and his mother Ellen Barry. They lived in Townshend Street.

A copy of the birth register showing the entry for Gerald Macaura (McCarthy).

From a very young age Macaura showed signs that he had a very original and inventive mind. He was one of five brothers, four of whom emigrated, with Gerald going to live with relatives in New Jersey.

Having a number of inventions to his credit, Gerald joined the Edison Laboratories of Industrial Research in the 1890s where he came into contact with people like Thomas Edison, Marconi and Henry Ford.

It was at the Edison Laboratories that Gerald invented the Pulsicon, a mechanically operated vibrating machine used in the treatment of arthritis. The Pulsicon was to earn a lot of money for Macaura before he came back to West Cork in 1901 and bought Lough Hyne House where he lived for some time.

For a few years he travelled extensively throughout Europe promoting and selling his Pulsicon.

An advertisement in The Southern Star of 16 January 1915.

There is a comprehensive article on Gerald Macaura in the Skibbereen and District Historical Society Journal, Vol. 3, 2007, copies of which are still available.

While any signs of the Kinemac are long gone, St Fachtna’s Silver Band is still going strong and is a wonderful legacy and ongoing tribute to Gerald J. Macaura.