West Cork is known for its eclectic mix of people who sometimes decide to take matters into their own hands to do something outside the norm.

Such an event happened on one island in Roaringwater Bay in 1973 when residents there decided to issue their own Long Island postage stamps.

It has a permanent population today of around 10 people but in the 1840s the island had over 300 inhabitants. The island is 4.8 km long and only 0.8 km wide and is connected to the mainland by a regular ferry to nearby Colla Pier.

The Long Island Local Carriage Service Ltd issued four postage stamps the 24th of April 1973 with values of 4p: 6p: 12p; 15p. The  stamps depict local scenes and were designed by Guy Brison-Stack and were printed by Dakota Ltd in Dublin.

The stamps show: Long Island Harbour; Fastnet Lighthouse; the Norman Tower of Leamcon Castle; and a map of the island.

The Long Island Local Carriage Service Ltd planned to operate a 5-day a week service to collect mail from the islanders at 230pm to be taken in a locked bag ‘via the Mail Boat’ to the Post Office in Schull. It is claimed that that permission for Long Island locals to set this up was given by the Department of Posts, Dublin.

After a year of preparation, much delayed by difficulty in finding a perforating machine, the stamps were issued and First Day Covers were prepared and serviced in Schull (and collected later in the day) and over 1,000 others letters were posted that day to collectors and stamp trade worldwide. When these letters reached Skibbereen – where postal rules dictated that all mail should be cleared before employees went home – problems arose. For, instead of the usual 15 or so letters from Schull over 1,000 arrived and, on noticing the Long Island stamps on the reverse. the Department of Posts, Dublin was phoned who said not to accept more mail until the matter was looked into.

Orders were serviced in the following weeks, but due to Government reshuffles no authorisation to continue ever came and the service, although allegedly legally approved, was eventually abandoned.

Seven months later, in November 1973, the Department of Posts and Telegraphs of Ireland wrote to say:

“I wish to state that the Irish Post Office did not, at any time, approve the establishment of a privately owned and operated carriage service by the Long Island Local Carriage Service Ltd., and that company was not given permission to issue stamps and charge rates for the carriage of mail.”

This is the only set of stamps ever produced for the ‘Long Island Local Carriage Service Ltd’ and the reaction of the Department of Posts may well be the reason that there were no more Long Island issues after this one. 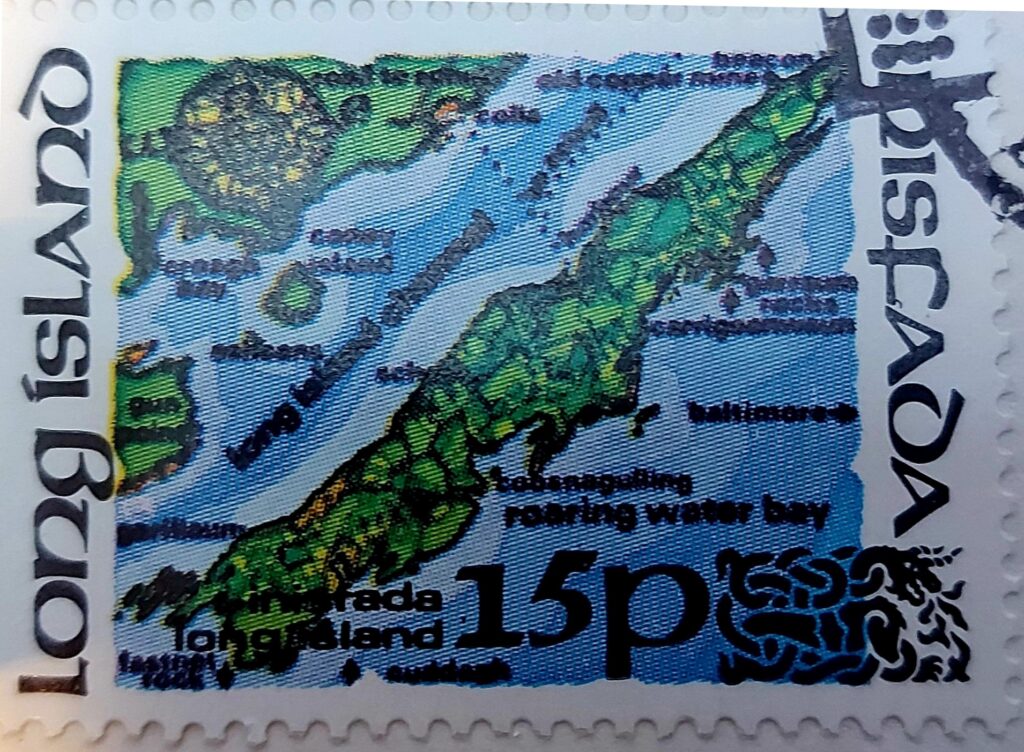 But it’s a fascinating story from a small island that has a history of novel communication methods.

In the 1940s a self-steering dugout boat operated to ferry goods to and from the mainland under sail. This c. one metre long boat was designed to travel unaided between Colla Pier on the mainland over to Long Island.

The sender would signal to Long Island that the boat was on its way with a message and money tied to the mast and their purchase would be sent by return from the shop on the island. This saved the residents of Colla a long walk into Schull and boosted trade on the island.

Just goes to show that extraordinary is ordinary in West Cork!