We are happy to report that 2 new signs are now in place at Aughadown and Drinagh old graveyards, listing those known to be interred in these burial grounds as well as giving historical information on these medieval sites.

And you can click here to watch a video tour of Aughadown graveyard too.

Aughadown graveyard overlooks the river Ilen in a very peaceful and picturesque location. It contains the ruin of St Matthew’s Church,  built in 1812. The western part of the graveyard was once the site of a late medieval church which was used up to the early 1800s. However, no trace of this building remains today.

The graveyard at Aughadown contains burials from the Roman Catholic, Church of Ireland and Methodist communities, with the earliest inscriptions from the early 1700s. Large stone slabs cover many of the graves, brought to the graveyard from the home-places of the deceased, some of them shipped in from offshore islands. There are also several crypts in Aughadown which have underground vaults to host  the remains of some of the most prominent families in the area.

Among those buried at Aughadown is Patrick McCarthy of the 5th Cork Brigade of the IRA. He took part in the Kilmichael Ambush in 1920 and was shot during the Siege of Skibbereen in 1922, aged 22. It was said that a lit cigarette revealed his location to his assassin. A plaque now marks the spot where he was killed on the Windmill Rock in Skibbereen.

Very close to the Patrick McCarthy grave is the tomb is of the Bechers of Aughdown, once major landlords in the area. Buried in this plot is Colonel Thomas Becher who died in 1708 and served as aide-de-camp to King William of Orange at the Battle of the Boyne in 1690.

Aughadown is also the final resting place of Dr Stephen Sweetnam. As a dispensary doctor during the Great Famine, Dr Sweetnam was very active in Famine relief. A Famine landlord, Lionel Fleming of New Court, is also buried at Aughadown.

Local folklore says that this headstone was broken to remove treasure hidden in its metal frame but we can’t say if this is true or not! 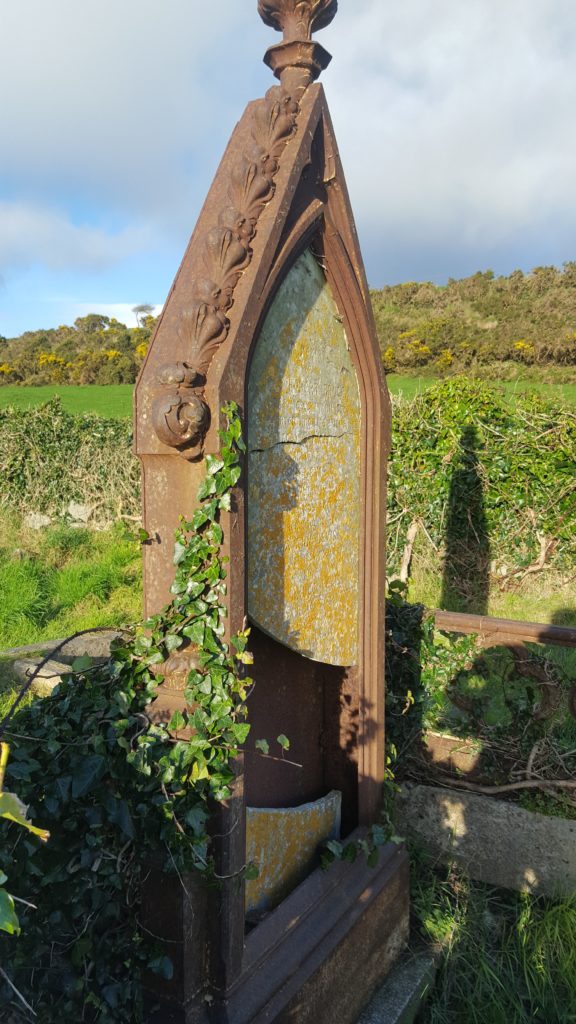 It is said that unbaptised babies were buried to the south of the graveyard walls, outside the walls and overlooking the River Ilen. Again, we have no way of verifying this but this was a custom at one time so this report is recorded and acknowledged on the new sign. These un-named little babies certainly deserve to be recorded too.

The signs at Drinagh and Aughadown are the third phase of the West Cork Graveyard project which surveyed a dozen historic graveyards in this area. Signs have already been erected at Creagh, Abbeymahon and Chapel Lane graveyards and it is hoped that other graveyard signs will be added over time.

The signs are proudly supported by Cork County Council and put together by a group of volunteers,  Barry McMahon, William Casey and Margaret Murphy alongside Terri Kearney of Skibbereen Heritage Centre and Mac Dara O h-Icí of Cork County Council.