Following their tour of the Famine exhibition at Skibbereen Heritage Centre, many visitors make their way to Abbeystrowry burial ground, the site of one of the most poignant and significant Famine memorials in Ireland.

This is the location of the infamous ‘pits’ or mass graves where possibly between 8,000 and 10,000 Famine victims were buried in seven years.

To watch a video tour of this graveyard click here.

Canon John O’Rourke, in his book, ‘The Great Irish Famine’ (published 1874), said of the graveyard: ‘The Churchyard of Abbeystrowry was the spot in which a generation of Skibbereen people was buried in a year and a half. Immediately inside the gate, a little to the right, are those monster graves called by the people ‘the pits’ into which the dead were thrown coffinless in hundreds, without mourning or ceremony hurried away by stealth, frequently at the dead of night, to elude observation and to enable the survivors to attend public works next day and thus prolong for a while their unequal contest with the all-conquering famine.’ 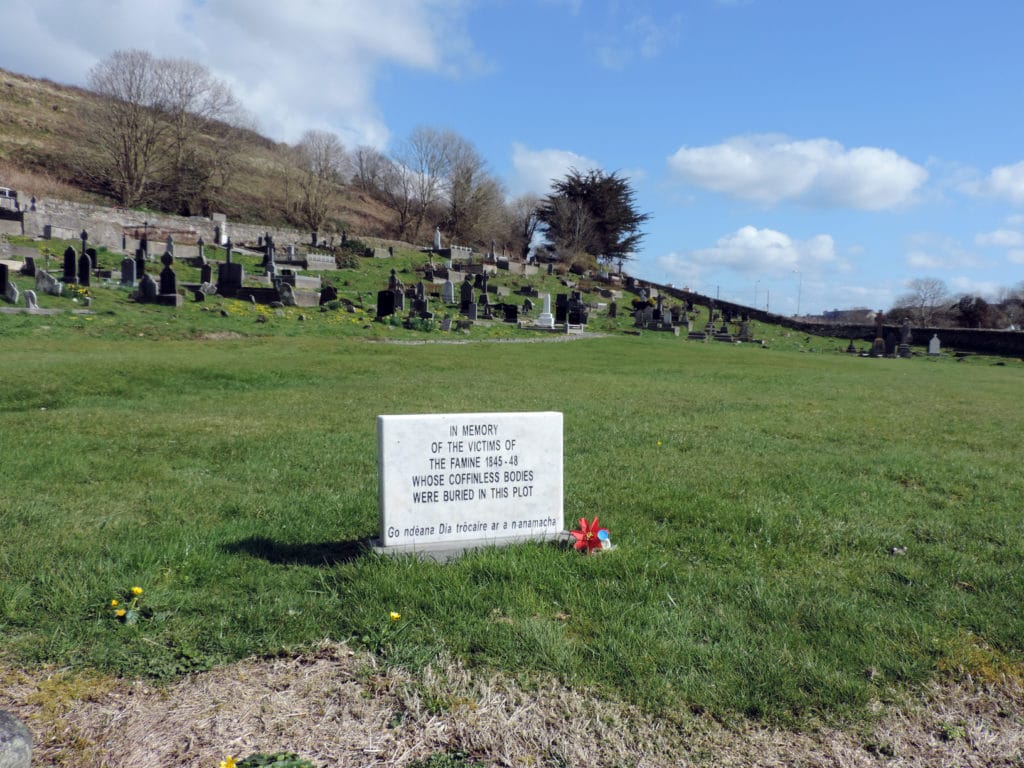 There are no exact records of the numbers who died in the Skibbereen Union area during the Famine, but the population declined by 36.1 per cent between 1841 and 1851. In March 1847 the local Relief Committee estimated the number of deaths every day at between 34 and 40, exclusive of those in the Workhouse.

According to Lord Dufferin, burials at Abbeystrowry up to February 1847 were carried out in a very haphazard fashion: ‘It was a very large graveyard, and most of the graves had long since been made; but in one corner there was about an acre of uneven and freshly-turned earth. This was the portion alotted to the late victims of the famine and disease; by these graves, no service had been performed, no friends had stood, no priest had spoken words of hope and of future consolation in a glorious eternity. The bodies had been daily thrown in, many without a coffin, one over another, the uppermost only hidden from the light of day by a bare three inches of earth, the survivors not even knowing the spot where those most dear to them lay sleeping.’

While the death toll was reduced significantly after 1848, there were still one hundred Famine victims a week being buried in Abbeystrowry in December 1849. 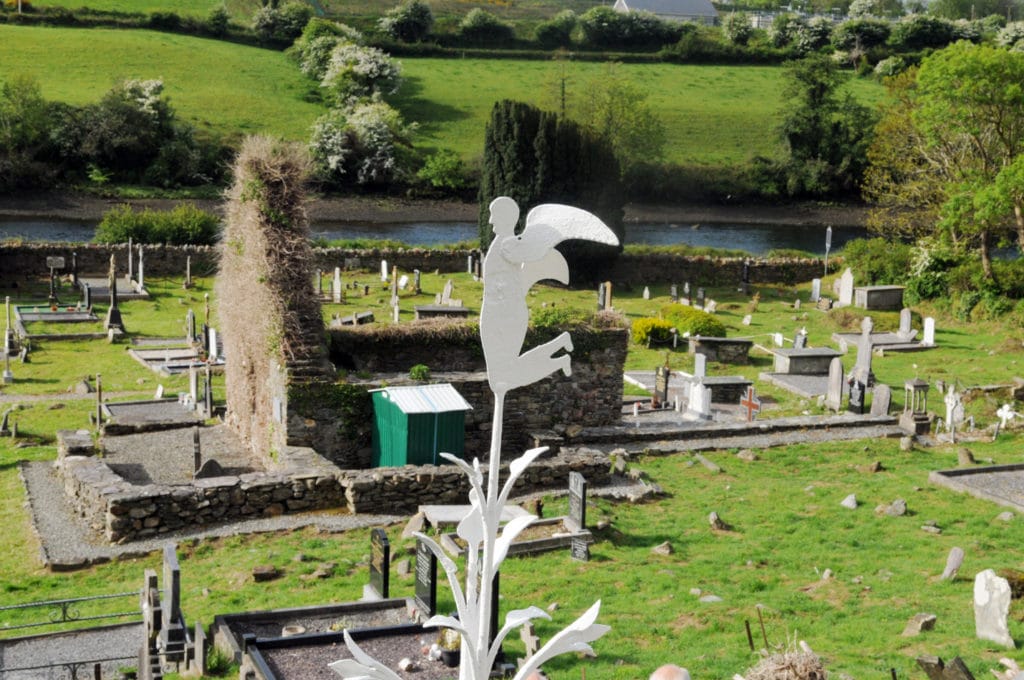 Many burials took place at night, with people burying their dead in secret, too ashamed to be seen doing so without a coffin or shroud, or too afraid to have it known that fever had entered their dwelling.
Abbeystrowry cemetery is less than a mile from Skibbereen Heritage Centre, a pleasant ten-minute walk following the course of the Ilen River west.

The antiquity of Abbeystrowry dates back to the 13th century. On the site of the present ruin, flourished a branch of the celebrated Abbey of Sancta Maura. The local name of the cell was Mainistir na Sruthra (or Sruthrach), i.e., The Abbey of the Stream. 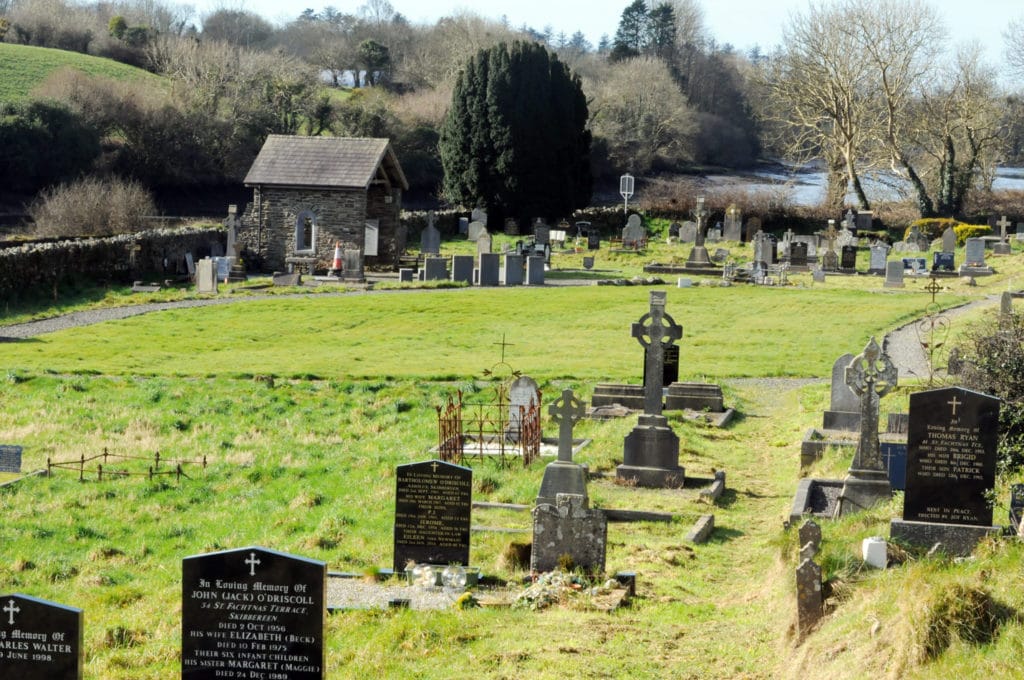 The lower portion of the cemetery is much newer than the higher area, and came into use in the early 1800s following the cutting of a new road which is now the main N71 route west to Ballydehob. That road now divides the Ilen river from the burial ground, but before that the cemetery was pretty much on the river bank and would have been very prone to flooding. The old main route west from Skibbereen was along the high road which runs behind Abbeystrowry. 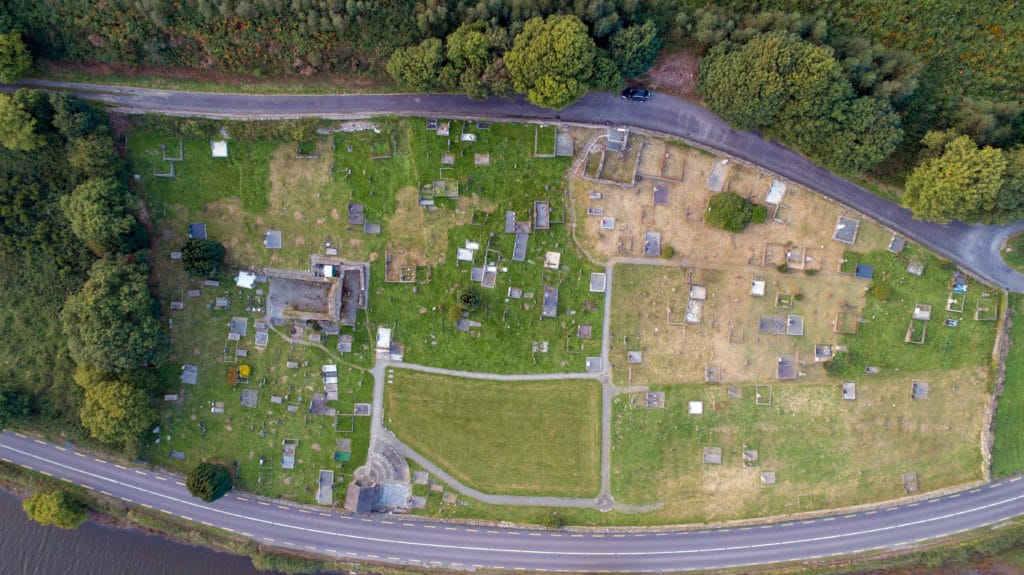 Cork County Council is currently widening this high road for the purpose of providing additional car parking spaces for visitors to the burial ground, a very welcome development as the paucity of parking facilities has long been a bone of contention with visitors to Abbeystrowry.