A Tribute to Pat Cleary

We are deeply saddened to hear of the death of the distinguished local historian Pat Cleary. Pat was one of the pioneers of Famine studies in Skibbereen and much of what we now know is based on research that was originally carried out by him.

Pat was a teacher at the local St Fachtna’s De La Salle Boys’ Secondary school where he passed on his love and passion for history to his students. He had a huge interest in Irish history generally but had a special interest in nineteenth-century Skibbereen. His work on that period in Skibbereen is still a valuable resource to historians and students, including his much-quoted article ‘Nineteenth Century Skibbereen’ published in Seanchas Chairbre in December 1983.

In all, Pat produced three issues of Seanchas Chairbre in association with Fr Coombes, the final one containing an article on the nineteenth-century astronomer Agnes Mary Clerke of Skibbereen. This was the first major research carried out on this local woman, who has a moon-crater named in her honour. The Seanchas Chairbre  committee also erected a plaque at the site of Agnes’ former home in Bridge Street in honour of Agnes and her sister Mary Ellen.

Pat Cleary was also a founder member of the Skibbereen Famine Committee and was very active within that organisation both as a researcher and in his role as secretary to the Committee. Much of the very worthwhile work carried out by that Committee was grounded in his comprehensive research. 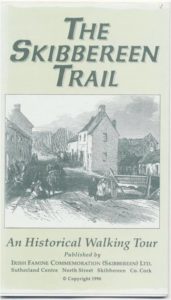 The first ‘Famine Trail’ leaflet of Skibbereen, published by the Skibbereen Famine Committee, was researched and written by Pat Cleary in association with Philip O’Regan (who now works in Skibbereen Heritage Centre). The duo went on to publish the first book on the Famine in Skibbereen in 1995, Dear Old Skibbereen.

Pat also guided many tours of Skibbereen’s Famine sites over the years, for Heritage Week and local festivals etc. But he also brought many members of the media to these sites, helping to spread the word about the Great Famine in Skibbereen to an international audience.

Pat was interviewed for a two-part BBC TV documentary on the Great Famine in June 1994 which was screened in 1995 to mark the 150th anniversary of the Great Irish Famine. Entitled “The Great Famine: Ireland’s Potato Famine”, this documentary was regarded as being ground-breaking at the time and was critically very well reviewed. John Percival, the producer of the documentary, also published a book to accompany the series in which Pat’s research on Skibbereen features.

Pat was also an active member of Skibbereen De La Salle Past Pupils Union for many years. He was a key driver in the production and research of the ‘And Time Stood Still’ books. These publications are a very valuable resource as a pictorial history of the Skibbereen area in two volumes.

Pat was hugely respected as a historian and was always generous and forthcoming with his extensive knowledge. He has left us a valuable legacy in his research of the Famine and nineteenth-century Skibbereen and we are deeply honoured to have known him.