In its almost two-hundred-year history, we think this may be the first time that there will be no Easter Week ceremonies at St. Patrick’s Cathedral in Skibbereen.

The ceremonies throughout the week leading up to Easter Sunday are the highlight of the religious year for Christians all over the world, but at this extraordinary time many of these churches, including St Patrick’s Cathedral in Skibbereen, will remain empty and silent.

The story of St Patrick’s Cathedral is an incredibly interesting one.

In the late eighteenth and early nineteenth centuries, when the Penal Laws still cast a dark shadow over Ireland, Catholics in Skibbereen carried out their worship in an old chapel at Chapel Lane which was built probably around 1750.

By the early 1800s this building was in an advanced state of disrepair. Fr Michael Collins, who became Parish Priest in Skibbereen in 1814, described the church as being in ‘such a state of repair that I daily fear that some accident may occur whenever the people are assembled in it, in consequence of the decayed state of the roof and the walls; it is altogether too small for the congregation, so much so that one half of the congregation are obliged to kneel in the yard, or on the highway, under the open air’.

By 1818, Fr Collins had put plans in place to build a new church.

A site for a new church was secured from Sir William Wrixen-Becher who later donated the land for the convent, adjacent to the church. He leased the site on which Saint Patrick’s was built for 999 years at the cost of a peppercorn per year. Becher, one of the most extensive landlords in this area, was an outspoken supporter of the Catholic cause in the last years of the Penal Laws before the Emancipation Act of 1829.

Fr Michael Collins started collecting money for the new church in 1818 but had to suspend his fundraising because of two periods of severe shortages in this area in 1816-1817 and again in 1822. Fr Collins initiated a half-penny collection on Sundays on his parishioners but found that people were so poor that a great many did not have the means to pay it.

Fr Collins said that he ministered to about 10,000 souls in Skibbereen and that in the summer of 1822 in one part of the parish more than 6,000 paupers were on the charity list; while in the other part there were nearly 3,000 paupers subsisting upon the charity from England in that year.

However, by 1824 Fr Collins had collected enough money to start building. The foundation stone was laid in 1825. The design, that of a plain pre-Emancipation Greek Revival T-plan church, was by Rev. Michael Augustine Riordan of Cork.

The original building was a very modest structure with plain glass windows and the floor was of flagstone where people stood or knelt. It was opened in 1826. The original building is said to incorporate much of the stone that came from the ruins of an O’Driscoll castle at Reengaroga on the banks of the River Ilen about six miles south of Skibbereen. The cost of the building was about £3,000.

Fr Michael Collins was appointed Bishop of Cloyne and Ross in 1831 but died on 8 December 1832. Dr Collin is buried beneath the soil in the nave at the southern side of the church, under a magnificent memorial plaque by sculptor John Hogan.

The church went through several significant modifications over the next 180 years.

In 1836 the bell was added. A few years later a new entrance was built at the western end of the building. The steps leading up to the building were also added at this time, using Sherkin stone. In the 1840s the three galleries were built within the church.

Much of this work was undertaken by Fr John Fitzpatrick who, following his appointment as Administrator to Skibbereen in 1835, cleared an outstanding debt of £600 and erected the new handsome stone front at a cost of £900.

Fr Fitzpatrick, who administered in Skibbereen until 1851, was a member of the Relief Committee in Skibbereen during the Famine (1845-52). He did extraordinary work in raising awareness of the awful conditions in Skibbereen and helped to raise substantial funds for the relief of the destitute paupers in this area.

At the Synod of Thurles in 1850, it was decided to dissolve the union of the dioceses of Cloyne and Ross, which had existed since 1748. Skibbereen became the See of the restored diocese of Ross and St Patrick’s became a Pro-Cathedral.

Between 1851 and 1953 when the diocese of Ross again lost its independence and was amalgamated with Cork, seven bishops served in Skibbereen.

By far the most significant improvement to St Patrick’s was carried out in the early 1880s by Bishop William Fitzgerald. He engaged the services of George Coppinger Ashlin, the finest architect then available, to design a radical modernisation of the church.

Under the direction of Dr Fitzgerald, the cast of the Cathedral was transfigured to the splendour it possesses to this day, giving the church the configuration of a Latin cross.

The eastern wall behind the original High Altar was opened; a semi-circular apex was added; the apse was embellished by three stained-glass windows; the High Altar, dedicated to the memory of Bishop O’Hea (1858-1876), and the Marian Altar, supplied by Pearse and Sharpe of Dublin, were erected; the arcade of three arches above the sanctuary and two dividing the transepts from the nave, the polished pillars of granite, the coffered ceiling which they support, all date from 1882-1883.

The white marble altar rail was the work of Messrs Pearse and Sharp, Dublin (James Pearse, principal of that firm was the father of Padraig Pearse). The wrought iron panels, with their floral and leaflet decoration, were executed by Eugene McCarthy, Upper Bridge Street, Skibbereen.

On the first Sunday of May 1883 the High Altar was consecrated and the reconstructed church was blessed and re-opened.

The present Blessed Sacrament Chapel (formerly the mortuary) and the Sacred Heart altar were erected circa 1920. It was in the late 1920s that seating was provided in the whole church. Prior to that, there were only a few pews at the top of the church.

The next major refurbishment was undertaken by Bishop Moynihan in 1950. This included the addition of two internal porticos of glass and wood inside both transept entrances. The present pulpit was erected in 1950.

A significant milestone in 1951 was the granting of St Patrick’s with full Cathedral status, having enjoyed Pro-Cathedral status for the previous one hundred years. Two years later, Bishop Moynihan was transferred from the diocese and Ross again lost its independence, officially being united with the diocese of Cork in 1958.

To comply with post Vatican II liturgical changes, in 1970 a new altar was provided in the sanctuary to allow the Celebrant of Mass to face the congregation. This altar was always meant to be temporary, but it was 2004-2005 before extensive renovations were carried out to the sanctuary.

With the celebration of Mass now being much more inclusive than in former years and much more participation of members of the congregation, it was decided to create adequate space for circulation of people in line with post-Vatican II practices.

The table-type altar and ambo from the 1970s and the pulpit of 1950 were removed.  The baptismal font was taken away from the south side of sanctuary. The altar rails from 1882 were retained but repositioned to allow for the moving forward of the altar, fronted by three steps of polished white marble, semi-circular in shape, into the nave which involved removal of three rows of pews. The new altar, smaller than the temporary unit fitted in the 1970s, was procured from the chapel of the former Mercy Convent which had closed in 2002.

At a Mass on 21 May 2005, Bishop John Buckley re-dedicated the new altar and blessed the sanctuary area. Skibbereen man Very Rev. Monsignor Leonard O’Brien preached the homily that evening and gave a beautifully eloquent portrayal of how important a role St Patrick’s Cathedral has placed in the lives of so many Skibbereen people for nearly two centuries.

There are Skibbereen people scattered all over the world who will have some association with St Patrick’s Cathedral, whether through Baptism, through receiving the sacraments of Communion or Confirmation, or some who may have been married there. Most will have happy memories of it.

St Patrick’s Cathedral has been a very special place of worship for many people from Skibbereen and beyond for nearly two centuries, we hope it will remain a special place for a long time to come. 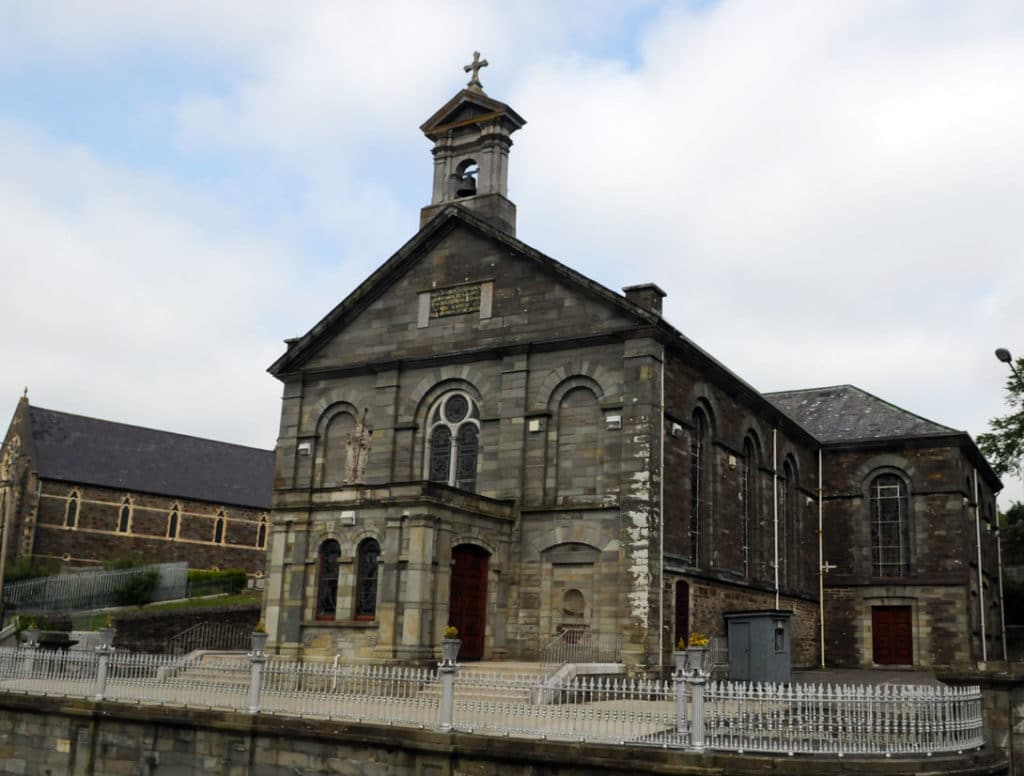 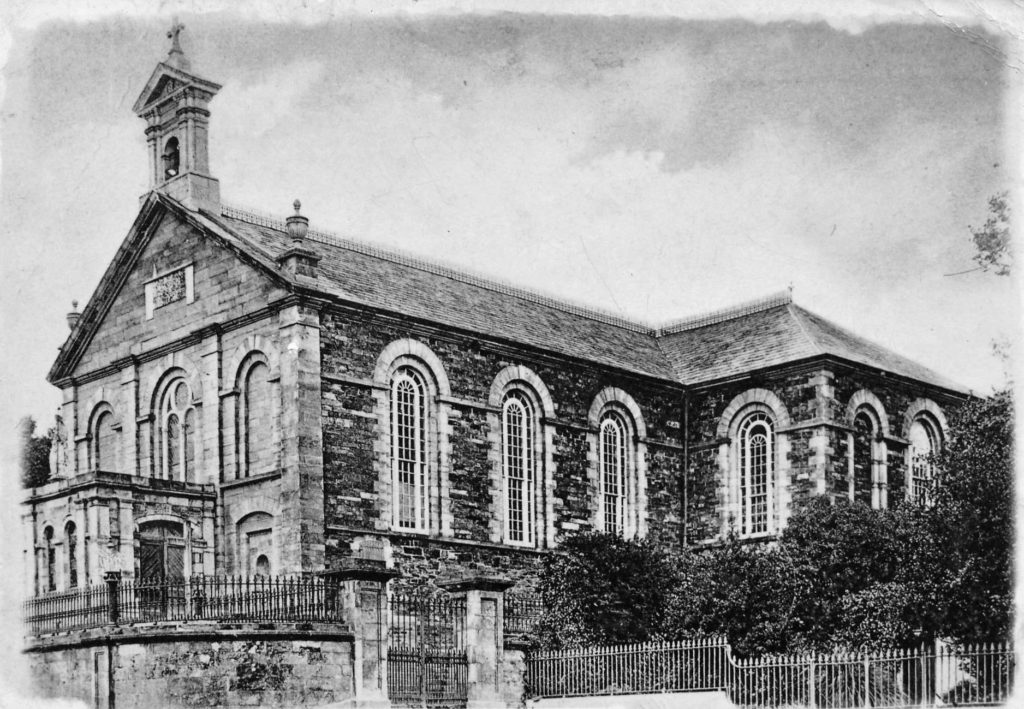