In terms of Famine heritage, Skibbereen is almost certainly one of the most important towns in Ireland.

Many buildings and areas in the town have a link to the Great Irish Famine (1845-52) and because so much was written and documented about that time in Skibbereen, we know a lot about these sites.

In January and February 1847, the artist James Mahony visited West Cork, having been commissioned by the Illustrated London News to report on the progress of the Famine which was by that time completely ravaging the entire area.

In the edition of 13 February 1847, the Illustrated London News published one of Mahony’s sketches titled ‘Skibbereen, From Clover-Hill’, which is, in essence, the northern entrance to the town. In the centre foreground of the sketch are the Courthouse and the schoolhouse. The streetscape of that are has changed very little in the past 170 years.

The Courthouse is still pretty much as it was back in 1847, and the schoolhouse in Mahony’s sketch is now the headquarters of Spearline (formerly St Fachtna’s High School).

The Courthouse dates from 1828-9. The architecture is similar to courthouses in other West Cork towns. A bridewell was situated behind the main building. That area is now taken up by Cork County Council offices.

This imposing building of cut limestone was designed by the prominent Cork architect, George Pain (c.1793-1838), who designed numerous courthouses and churches in the early 19th century.

The building, classical in style, was extensively refurbished in 1923 and again in 1956.

When the Skibbereen Poor Law Union was formed in 1838, the Board of Guardians held their meetings in the Courthouse until the Workhouse was opened in 1842.

Many important meetings were held in the building during the Famine and the Skibbereen Committee of Gratuitous Relief, the first relief committee to be established in Ireland during the Famine, held their meetings there.

In the period of great hardship during the Famine, crime rates rose considerably and there are many reports of the court sessions held in Skibbereen.

‘SKIBBEREEN, Saturday – The Sessions commenced here on last Monday – a sessions the like of which has never been seen in this County. There were no less than 350 prisoners for trial – charged on 600 bills of indictment – a number of hitherto unparalleled and amounting to three times the quantity of criminal business formerly transacted at the assizes for the whole county, while this session is held for the West Riding only. The offences are chiefly confined to cattle and sheep stealing and petty theft.

‘In consequence of there being no prison accommodation for the large number of persons to be tried, one or two stores were taken in the town where they have been placed under the care of parties of soldiers, and where their condition has been so deplorable in consequence of their being so crowded together, that the authorities have been obliged to adopt sanitary measures.’

The report also stated that ‘a very striking circumstance in the business of the sessions is the extreme severity of the sentence. … Up to half past 5 o’clock yesterday evening, out of 57 persons tried, 33 were sentenced to be transported!’

Dr Donovan and his assistant Jerry Crowley appeared before the court and pleaded for improved conditions for those being held in prisons in Skibbereen. Over 150 were being held under guard in a store in the town. In the Bridewell, located behind the Courthouse, there were nine persons in fever in one cell, and in another, measuring 12 feet by 11 feet, there were 56 female prisoners. Dr Donovan said: ‘It would contain but 1,320 cubic feet of air – it was not more than sufficient for 3 persons, while there were actually 56 persons in it. … One of the women just expired as they entered and 8 or 9 more were in fever.’

The magistrate described it being ‘as bad as the black hole of Calcutta.’

Dr Donovan suggested that prisoners in fever should be removed to a location near the town, called Abbey Cottage, which he had acquired to open a Fever Hospital. The magistrate agreed and said that the Court would cover any of the costs incurred by Dr Donovan.

For some 170 years the building which is now home to Spearline has stood in a prominent location at the northern entrance to Skibbereen. It has been an educational facility all that time – until June 2016 when it closed its doors following the building of a new Community School in the town.

The commemorative stone over the doorway of the school recorded that it was opened on 1 April 1846, but it is much more likely to have opened in early 1847. Whether or which, we know it was opened during the Famine and that it featured in some of the literature of that time from Skibbereen.

A report in the Cork Examiner of 24 March 1848 gives a good description of the school. ‘In the town of Skibbereen, a really splendid National School has been lately built, at an expense of £1,400. Of this large sum, but £300 was contributed by the Board of Education; whereas £600 were made up in the parish of Skibbereen; and £500 are still due. There is not in any part of Ireland a school-house superior to this; in which there are at present taught about 600 boys and 650 girls. These children now receive a ration each day, consisting of three-quarters of a pound of bread, supplied by the British Relief Association.’

At one time, the British Relief Association, a private charity set up in London on 1 January 1847, was feeding 12,000 children daily in schools in the Skibbereen Union area.

The school saw many transformations in its long history. Following the arrival in Skibbereen of the Sisters of Mercy in 1860, girls were given the opportunity for education in the Convent.

In the 1870s, Dr Fitzgerald, Bishop of Ross, founded the University and Intermediate School in the building. The first principal was Edward Hogan MA, and the school quickly established itself as an academy of excellence.

At that time the two-storey building accommodated two schools, the national school upstairs, and the University and Intermediate School downstairs.

In 1922 the school was used as barracks and prison by the Irish Free State Army during the early months of the Civil War. Irregular soldiers imprisoned here included Andrew McCarthy of Rerahanagh whose mother, Kate McCarthy was tragically killed in an accident on 30 September outside the prison when she was thrown from her donkey and cart when passing the prison.

This incredibly interesting story was recorded by Kate McCarthy’s great-great-great-granddaughter as part of the ‘Stories of the Revolution’ schools’ project being run by Skibbereen Heritage Centre and supported by Cork County Council.

In 1932 a new national school for boys was opened in Market Street. By the mid-1930s Dan Duggan, who was operating the U&I school on his own, was getting elderly and Dr Casey, Bishop of Ross, was concerned that secondary education should be more widely available and so invited the De La Salle Brothers to Skibbereen.

In the late 1970s the interior of the school was extensively altered in a major renovation, which included transforming the two-storey building into a three-storey one. The Brothers ran the school until 2001 when they ended their 64 years of outstanding service to the Skibbereen area. 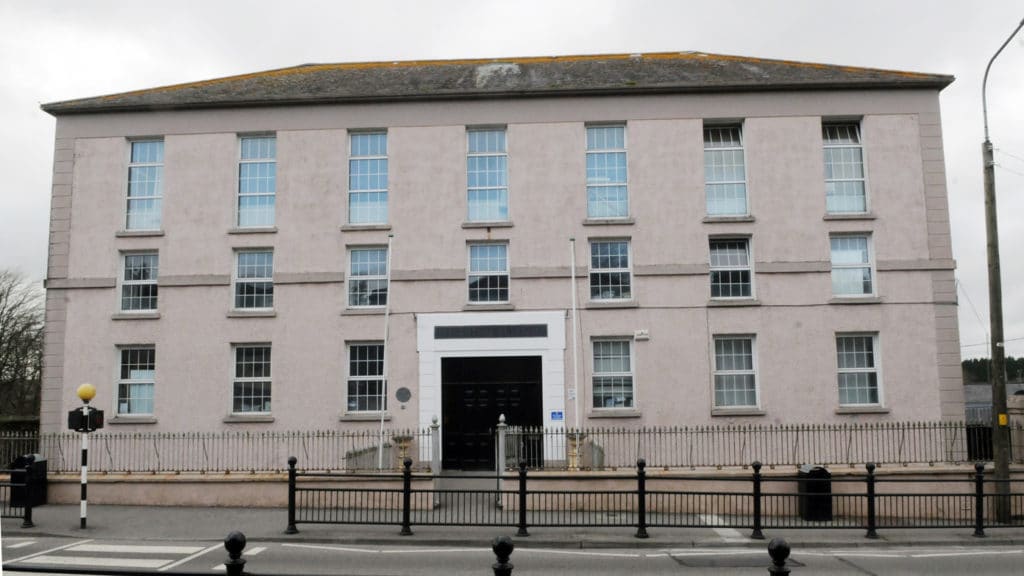 St. Fachtna’s High School continued to serve the community until 2016 when it finally closed its doors as an educational institute, bringing to an end some 170 years of an extraordinary story.

The building was then purchased by a local tech company, Spearline, and it has since been transformed into their headquarters, retaining the integrity of what is a hugely historic building in Skibbereen.

A Fascinating Story of Skibbereen Ancestors