It is always nice to receive a present of a book. Even nicer, in our case, when that book is on history, and even better again when that book has a strong Cork connection in the narrative.

I was recently given a copy of ‘A Diary and History of 1914-1918 World War 1: Four brothers went … and Four came back …’, by Kath Julian. This is the the story of four Sullivan brothers, New Zealand-born of Irish parents, who served in World War I – and all four survived. 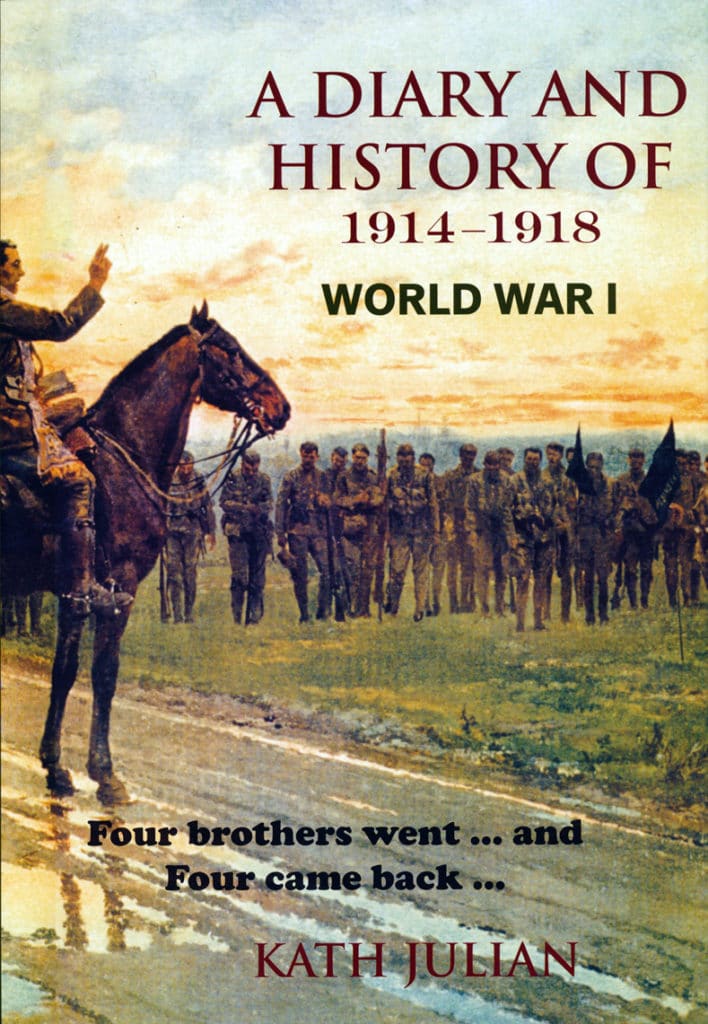 Kath published this work privately in New Zealand some time ago, but the story has now been made available in this part of the world thanks to the publication of this beautifully produced book. Fr. Gerard Casey, from Doneraile, who has family connections to the Sullivans, has written a new foreword to this European edition and puts the story nicely in context for readers.

Timothy, Thomas, John and Daniel Sullivan, first generation Irish-New Zealanders, all fought in the Commonwealth forces of the Allies in the New Zealand Expeditionary Force in World War I. Their combat experience took them to Gallipoli (Anzac Cove) and subsequently to the Western Front in France.

These men were sons Thomas O’Sullivan, who came from Carriganleigh, near Mitchelstown, and Ellen McCarthy from Goleen. Thomas and Ellen had seven children, five boys and two girls.

There are members of the O’Sullivan clan still farming and living in Carriganleigh, and there are also relations of Ellen McCarthy still living in the Goleen area.

Thomas O’Sullivan emigrated from Mitchelstown to New Zealand in 1878, and also a passenger on the ship he travelled on was Ellen McCarthy. The couple subsequently married in New Zealand. The story of their journey to New Zealand which included a dramatic shipwreck and rescue has been told in another publication.

The author of ‘Four brothers went … and Four came back’, Kath Julian (née O’Sullivan), is a daughter of Daniel, the youngest of the four brothers featured in this book.

The story does have certain resonances with that of the five Sullivan brothers who lost their lives while serving on the same ship, the cruiser USS Janeau, on 13 November 1942, during World War II. Those five US-born brothers, George, Francis, Joseph, Madison and Albert, lived in Iowa. This was the greatest loss of family in the entire Second World War, and subsequently family members were not allowed to serve abroad the same vessel for the remainder of the war.

And, yes, before you say it, the story also has similarities to that of the four Ryan brothers who featured of the 1998 Hollywood film ‘Saving Private Ryan’. But this is a better story; the four Sullivan boys came home!

This book is the result of years of research by Kath Julian after she found her father’s diary and she realised what a treasure she had. The result of Kath’s research provides a unique insight into what the experience was like for her father and his three brothers. It includes accounts of the troop movements, the eight-week journey from New Zealand with full battalions on board, the journey to the battlefront in Gallipoli, the months of intense conflict, the subsequent evacuation and the new expedition to the Western Front in France.

The rich descriptive text contains extracts of letters from the four brothers home to their parents and the liberal use of photographs help to make this a hugely enjoyable and engaging book. And definitely a book that will be of interest to Cork people, at home and abroad.