In these dark days of the corona virus crisis our society is being changed utterly.

People are dying from this awful disease and even in Ireland, where rich funereal customs are embedded in our psyche, we are having to adjust to a new reality. It’s heartbreaking for the families of those deceased not to have the comfort of their neighbours and friends around them sympathising with them on their loss.

We thought we would bring you a very moving story from another crisis, the Great Famine, when a young 15-year old boy went to great lengths to bury his neighbour in ‘Black ’47’. 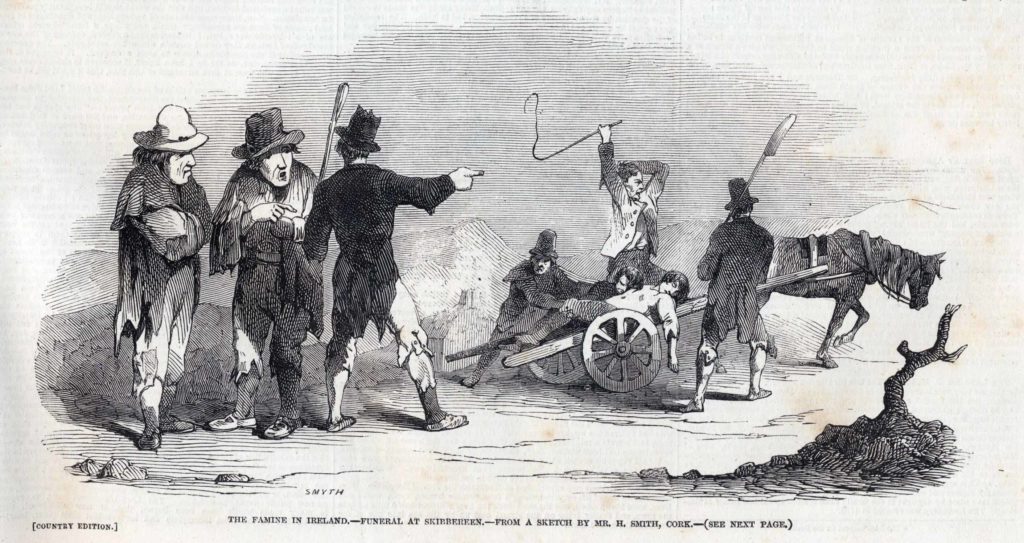 The Irish revolutionary Jeremiah O’Donovan Rossa’s fire and his fight against injustice was forged by Famine. As a child, he led a comfortable life in Rosscarbery and Reenascreena until the arrival of the Famine that changed his life. His father lost his business and died from ‘famine fever’ in 1847 when Rossa was just 15 years old.

By age 17, the rest of his family had emigrated, having been evicted from their home, Rossa came to Skibbereen to live with an aunt. At early stage of his life he had experienced all the horrors of Famine – hunger, disease, eviction, emigration and death. It would have an profound impact on him and his life.

Over 20 years later, while incarcerated in prison, Rossa wrote a famous poem about the burial of his neighbour, Jillen Andy, who died in 1847 when Rossa was a boy of  just 15.

His neighbour Thady came to Rossa asking him to help him bury his mother:

“Come to the graveyard if you’re not afraid,

And I want someone that will bring the spade, 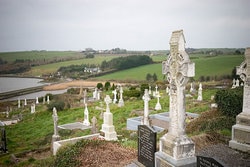 Thady was what we would now call ‘special needs’ and Rossa wrote that he was ‘fond’ of him. They buried Jillen in the dead of night in the Abbey graveyard in Rosscarbery:

“Now in the dark churchyard we work away,

The shovel in his hand in mine the spade,

And seeing Thade cry, I cried, myself, that day,

They have not much of Jillen but her frame.

No mourners come, as ’tis believed the sight,

of any death or sickness now, begets the same.”

During this lonely burial in the dead of night, Rossa nonetheless ensured that Jillen’s head was straight in the coffinless pit by laying it on a stone. He untied her apron to cover her face:

Take out that pin”‘. There now, she’s nicely rise,

But lay the apron first across her face,

Though only 15 years old, Rossa displayed a level of sensitivity that belied his youth to  grant this poor woman as dignified a burial as he could in such awful conditions. 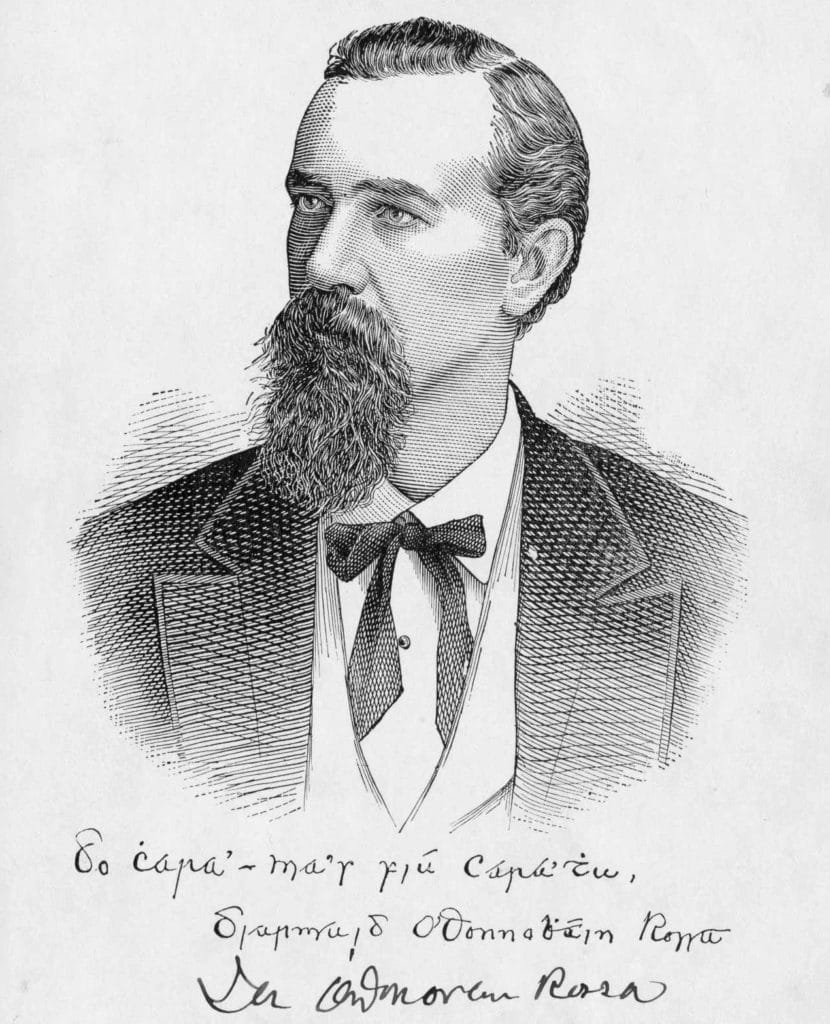 However, that night haunted Rossa for many years:

“How oft in dreams that burial scene appears,

“Some things are strongly in the minds impressed”

“And this is why I see in dreams I see the face,

of Jillen Andy looking in my own,

The poet-hearted man; the pillow case –

The spotted handkerchief that softened the hard stone.” 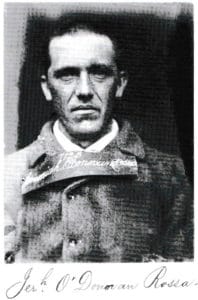 Rossa wrote this poem over 20 years later when he was in solitary confinement in prison. Burying poor Jillen must have had a huge impact on him as remembered the scene so clearly.

He had no writing materials in prison so he wrote the poem in his head, verse by verse, day by day, describing the process:

“I made one verse one day, and kept it in my memory until the next day, when I made another, and when I had the story of ‘Jillen’ I kept tagging on some other verses to it until I had a string of 22 or 3.”

The Famine really defined the course of Rossa’s life – as he put it in the poem:

“Welcome these memories of scenes of youth,

That nursed my hatred of tyranny and wrong”

The events of today will, no doubt, change our society too. But, as was the case with the 15-year old Rossa, such crises also bring humanity and compassion to the fore.

And here is the poem in its entirety: 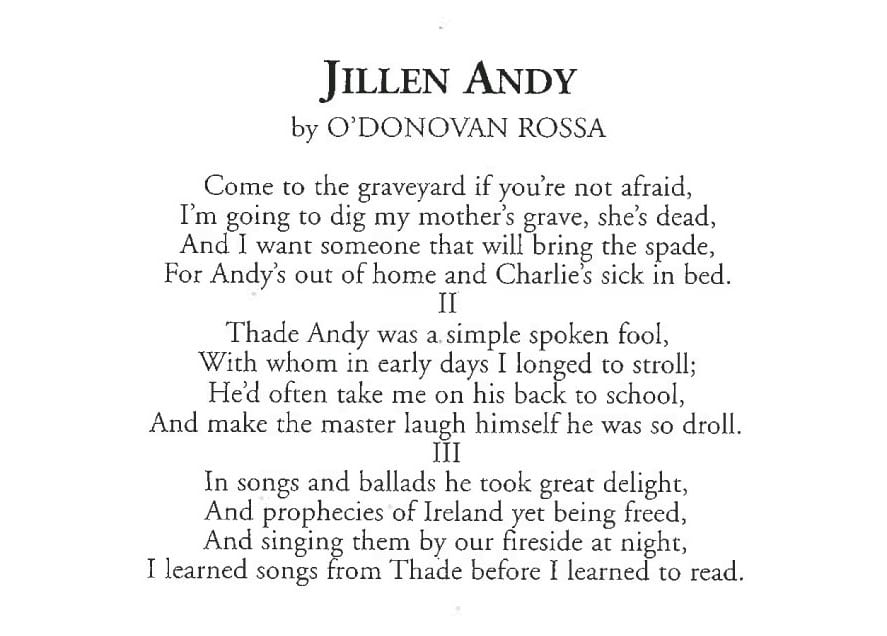 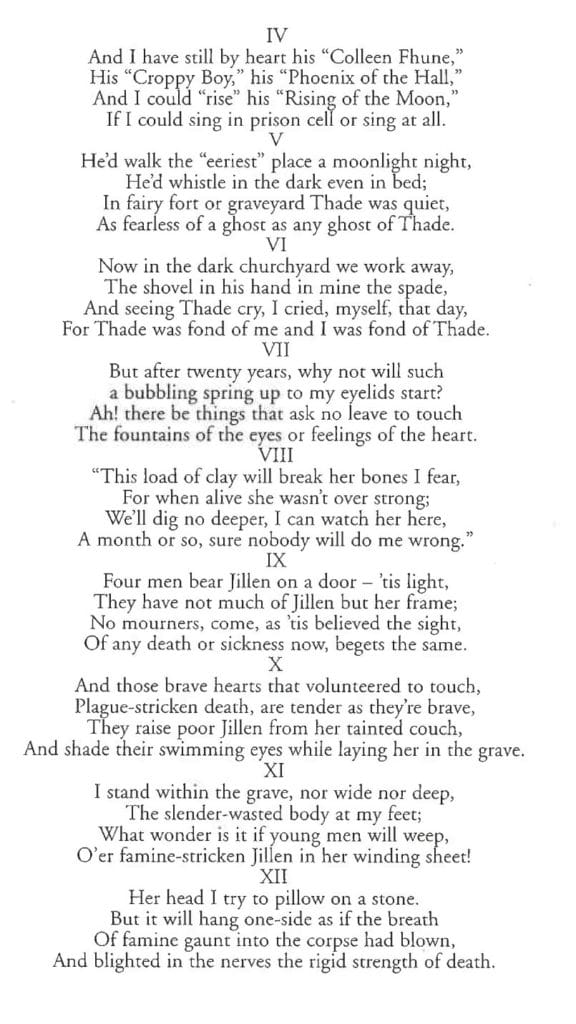 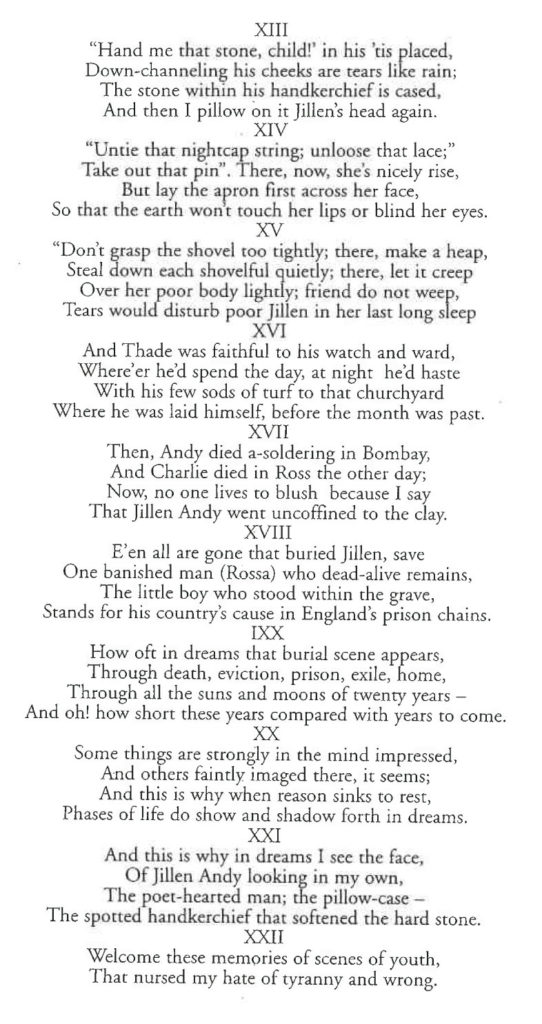